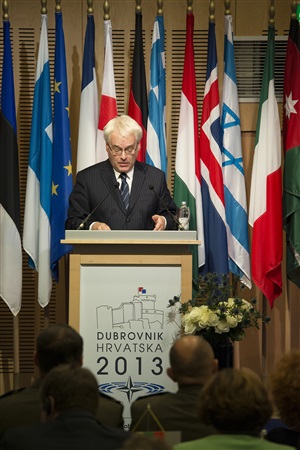 Mr. President of the Parliamentary Assembly,
Mr. Secretary-General of NATO,
Distinguished participants of this session,

It is my great pleasure to welcome you at your 59th Annual Session. It is a special honour for Croatia to be able to host you as one of the new member states of NATO and, since recently, of the European Union. With Croatia's recent accession to the European Union and earlier to NATO, we have accomplished some of our strategic objectives but also proved that we are truly and permanently committed to cooperation with our allies and friends within the framework of long-term project of building peace and democracy, security and freedom in the world. As a relatively small country, we are interested in the efficient work of international organisations, and in particular of those that are focused on the issues of strengthening democracy and increasing security. This orientation arises not only from our need to cooperate with others in order to increase the level of security for ourselves – but also from our deep conviction that peace can be achieved in the first place by strengthening democracy. We see a connection between democracy and security and we consider that strengthening the democratic character of a country and its contribution to global security are a single process.

Democratic countries, countries where one comes to power and loses power at elections, are more stable than autocratic dictatorships. At times, it may appear to us – in particular to us who are former or current parliamentarians – that democracy is a long, complicated and sometimes not completely efficient model of problem resolution. However, democracy remains a better model for establishing peace and stability than any other alternative model. Pluralism, transparency in the decision-making process, public argumentation and orientation towards consensus and compromise – these are the values that we develop through parlamentarianism. Parlamentarianism is a fight of ideas and views, a fight of interests and arguments. Due to the fact that institutions allow room for verbal “wars”, room for real wars, conflicts and the use of force are thus reduced in our societies. Wherever there is a possibility for differences to be manifested and presented and to be openly and freely discussed – room for violence is reduced, violence that does not take into account arguments or interests, security or freedom of citizens.

Democracy makes our countries freer and more secure. Also, democracy is in the foundation of peace policy. Democratic countries do not wage wars against one another. When settling disputes, they rely on the methods of persuasion and negotiation, on the power of arguments rather than on force and aggression. I would like to lay special emphasis on this since there are some who lose sight of the importance of the democratic character of our societies. Democracy is not a problem but a solution. We can be dissatisfied with a democratic deficit or a lack of democracy but it would be very harmful if we should translate this dissatisfaction in the rejection of democracy. Strengthening of extremist and anti-democratic tendencies in any of our countries, and beyond NATO itself, would create dangerous situations and would not contribute to peace and security. This would be a step in the wrong direction. I am confident that we all share this conviction.

Both historically and in line with its present-day idea, NATO is directly linked with the wish to promote democratic values and stabilise democratic institutions. For us, who have joined the organisation recently, democratisation also meant increasing our security and stability – and vice versa: more security and stability made possible further pluralisation and democratisation of our home policy. For this very reason, I consider consolidation of democracy in our countries as a contribution to peace and stability in our part of the world and to global security. I believe that it is important to emphasise this very link between democracy and security in order to additionally encourage democratic tendencies in a broader context.

I am confident that some of these topics will be discussed at this session of the Parliamentary Assembly. This will also be an opportunity to additionally advance the bonds between parliamentarians and parliaments of NATO member countries, as well as institutional models of cooperation with other countries that take part in the work of the Parliamentary Assembly. I wish you every success in this!